Well, I'm back in sunny Stoke-on-trent now after a fun weekend of exploring Cambridge and Gaiman-ing in Ely.

The boyfriend and I stayed in Cambridge Central Travelodge (stay classy), and were very happy to see that there was a Nando's AND a Pizza Hut within metres of the hotel.. yay! We both had a great time exploring Cambridge, it's a really picturesque city. It has a cool vibe; there's loads of nice coffee shops and cafes and people cycle everywhere.. very european.

We also had a stroll around St. John's college - which is basically Hogwarts. Here's a fun fact for you, apparently fellows of the college are the only people outside the Royal Family legally allowed to eat unmarked mute swans.. nice!

Next stop was Ely, which I was surprised to find out was actually pronounced eel-y - on account of all of the eel fishing that they did there, makes sense.

We headed on over to Topping and Co book shop, where the very helpful staff gave us our tickets to the signing and informed us that they were expecting around a thousand people to turn up! With a train to catch later on we decided to get in the queue early.

We spent around 2 hours waiting, but it was quite fun to sit and people watch in the sunshine. Got in a bit of reading of Ocean at the End of the Lane too, and was happy to see that there were cats in the story! Before we knew it, it was time to go inside. 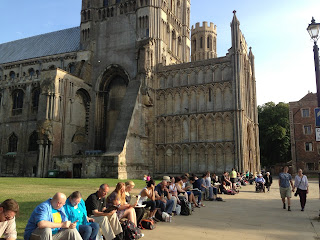 Ely cathedral is a beautfiul old building and a great atmosphere for the signing, complete with bats flitting around! Neil came out and answered some questions put to him by the audience, he was really funny and interesting to listen to. Someone asked what he thought about people thinking he was odd, and he said that he sees himself as normal and the rest of the world as odd! He did a reading of Ocean, and his new children's book Fortunately, the Milk and was really good at bringing the stories to life, doing different accents and everything. 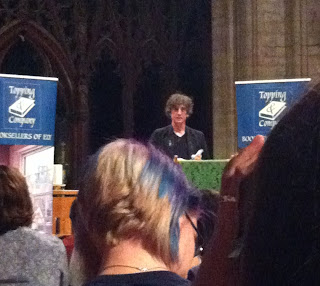 Afterwards as we were in the first 100 people we got to meet him pretty quickly. As we were waiting we had to write down our names, and what we wanted our signed dedications to be and I went with "something about cats!" 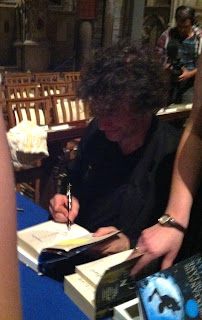 Was really nervous but Neil was very friendly and made the effort to chat to everyone. Kudos to him as I think he was there pretty late "signing until my hand falls off." I said that I liked cats, so he drew me a "bat-cat" which was pretty awesome! 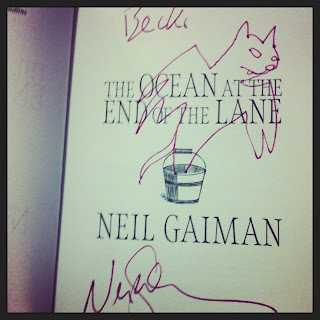 My boyfriend is a writer, and Neil remembered reading one of his stories on twitter and even shook his hand. We were really chuffed at the end of it all, and it was a brilliant end to our trip.

EmeraldEmbers
I'm an anxious twenty something living in Staffordshire.